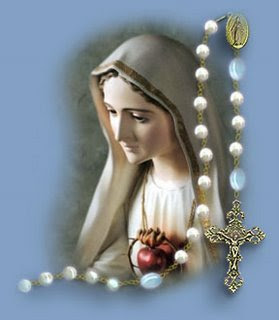 Spirit Daily today links to InGod'sCompany2 blog with an amazing post - this story is a must read. The power of the rosary never ceases to amaze me. Please pray it today and every day.

The Killer and the Rosary

"... To understand that Our Lady needs us, it helps to begin with the awareness that we also need her and that her help never fails those who pray to her with a sincere heart. This American Monsignor is a good witness of that.

On May 14, 2009, Mgr. William Kerr, a leading human rights figure, died. Mgr. Kerr often spoke of his very first hospital assignment, where he ministered to a young burn victim dying from his injuries. Later, he recalled, he would be called upon to perform even more ghastly duties.

In 1978, the police called Msgr. Kerr in the middle of the night to accompany them to a sorority house in Tallahassee. When he arrived he was told that all but one of the girls in the house were dead or near death, killed by the infamous serial killer, Ted Bundy. After administering last rites to one of the college girls who was dying, the police on the scene asked Fr. Kerr to speak with a girl who had survived the massacre unscathed. They had a very specific question: Why did Bundy stop right inside the door to her room, drop his weapon, and leave without touching her?

The young woman refused to speak to anyone except a priest. When Fr. Kerr approached the near-catatonic girl, she told him that her mother had made her promise, before going off to college for the first time, that she would pray the Rosary every night before bed for protection. Even if she fell asleep praying the Rosary, which she had that night. When Bundy came into her room to murder her as he had the other girls, the beads were still clutched in her hands.

Ironically, Bundy later sought out Msgr. Kerr as a spiritual counselor while he waited on death row. Over the course of their sessions, Bundy explained to Mgr. Kerr that when he entered the girl’s room, he just wasn’t able to continue with his spree, he dropped his weapon, and he fled.

Such is the power of our Mother’s protective mantle. Such also is the wisdom of a mom, who managed to give her daughter the most efficient, powerful weapon - the rosary, which later saved her life. "

Posted by Happy Catholic at 5:26 PM

Why else would he be so happy?

Happy to Be Catholic Favorites